James Blackburn is an international scout and today he shares his breakdown of Jabari Parker vs. Andrew Wiggins from an NBA scout’s perspective.

Wiggins came out passive this game, but got better as the game went on. Wiggins was clearly the best athlete on the court, and is as explosive and athletic as any player in the country. Very quick jumper who also gets up and down the floor quickly- excellent in transition. He moved well with out the ball, which was nice to see. Did a good job of being assertive in the post, demanding the ball, and getting solid position. Solid rebounder on both ends- has a nose for the ball, and uses length and athleticism to grab rebounds at its highest point before anyone else can get to it.

Where Wiggins needs to improve is on the perimeter offensively. His jump shot is not good to say the least. It looks rushed and his mechanics are not very good. He is a good FT shooter however, and I would expect him to shoot around 70% from the charity stripe this season. He needs to improve his ball handling and perimeter movement overall as well. Handle is too loose and he stays too vertical on some of his drives. He seemed bothered by perimeter pressure on more then one occasion tonight. He could stand to add some weight to his frame. His movement is not fluid, and the game just doesn’t seem to come natural to him- seemed a bit uncoordinated. He has a ton of potential, but is still raw in more then one area at this point. His defense was better then average and although he got in foul trouble tonight, several of those fouls were poor calls. Overall solid performance from the young freshman who will only continue to get better and better as the year goes on. His best basketball is still ahead. 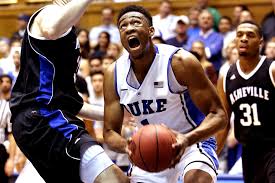 Was clearly the best player on the floor tonight as he came out hot and never really slowed down. Started off 2-2 from the 3-point line and finished the game with 4 threes. Has a high release on his shot, but he dips the ball on the catch, which takes away the advantage of his high release. Although he made 4 threes last night- I would not classify him as a pure shooter. Skill wise, Parker is remarkable. A player of his size and strength who can pass, dribble, and shoot like he can does not come along every year. He showed he was capable of putting the ball on the floor and scoring at the rim going either direction. He is more athletic then given credit for and had several above the rim finishes this game. His body is ready for the physical play of the next level, but I would like to see him turn some of his baby fat into muscle. Was all over the court early getting steals, and was being active going for shot blocks and leading the break after rebounds. Good quickness and speed in the open court for size. Loves the step back 3- impressive that he has that in his arsenal at his size and age. Fluid movement and has a quick 1st step. Looked to make plays for others. His versatility and skill set are his best attributes.

Although Parker is a well rounded player, he still needs to work on a few things, mostly on the defensive end. He needs to improve as a screener, set most of them half-heartedly and did so knowing he would get the ball off the pop, not to free up the ball handler. Is a solid rebounder because of big frame, but doesn’t box out on the defensive end. Tends to gamble a little bit too much on the defensive end and was slow rotating over on the weak side. Looked passive on the defensive on the defensive end in general and was out of stance. Needs to be more disciplined throughout shot clock. I did like the fact that he was aggressive in attempting to block shots, but he ended the game with only 1 blocked shot and fouled out- needs to know when to try to block and a shot, and when not too. Took poor angles and was often late when trying to make a play. Poor lateral quickness- Can he defend the P/R at the next level?

Based soley on the game last night and their matchup, I would say Parker is clearly more NBA ready at this point, but has a lower ceiling. If Wiggins can fill out a bit and improve his perimeter game, he will be the better pro in about 3-5 years. I do not think Wiggins will be an All-Star or an All-Pro player however right when he enters the NBA, its going to take him a while. It’s been brought up before about Wiggins work ethic, and some question how good it is. Hopefully, it will improve, and if it does he will eventually become an All-Pro player, but I do not believe he will is the next LeBron James or anything like that, as some people are saying. There have been plenty of super-athletic kids who have come out before and that haven’t developed. Parker will have a long career if he can stay injury free and keep his body in check. Its going to be an interesting year watching these two and the other talented freshman out there compete and play.