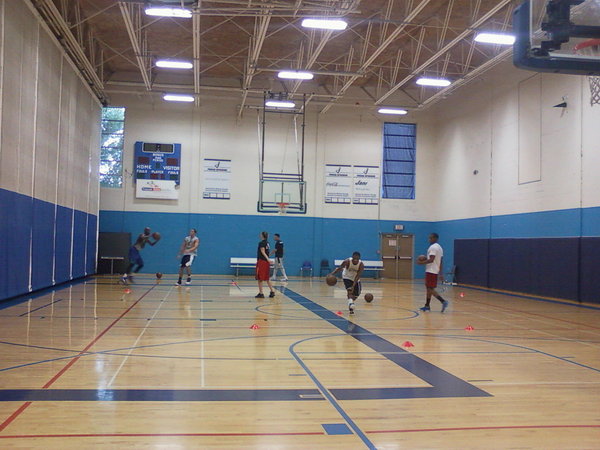 The North Dallas Vandals are expected to make a strong run during this season; the team will open training camp with several solid players. In addition, the team also added Jonathan Blake (6’7”-F-87, college: Texas Wesleyan) and Ashton Brown (5’10”-PG-91) to their roster on Wednesday, November 6.

The Vandals will open their 2013-2014 season on the road against the Conway Cyclones on November 16 at Hendrix College before returning to Dr. Pepper Arena to play their home opener against the Colorado Kings. The team will then play a home and away series against the Metroplex Lightning.

Here are the Top 20 Players listed by the team headed into training camp (in addition to Blake and Brown).

For more information about the Vandals, visit their team page here.

Damien Goodman (6’6”, SF, UNC-Pembroke)
3 TP, 1 assist, 3 rebounds
Smart player- knows how to play the game. Boxes out. Good defender- goes ball side on off ball screens. Draws fouls and gets to the line. Versatile- scorer, defender, and good passer. Played last season in Switzerland for the Boncurt Red. Has experience playing in Uruguay and has played in the ABA for the Georgia Grizzlies in the past.

Terrance Jones (6’7”, F, Livingstone College)
4 TP, 3 rebounds
Big man who knows how to throw his weight around. Has the ability to put the ball on the floor and get to rim. Needs to keep head in game- has lapses where he loses concentration and falls asleep. Skilled player who can score and rebound.
This will be the Jones 4th year playing in the ABA, has also played in the WBA.

Landon Quick (6’1”, PG, High Point University)
11 TP, 2 assists, 4 rebounds, 2 steals
Dictates the pace of the game-poised and in control. Quick hands. Good body control in air. Smart passer- throws good wrap around entry passes to post. Can break man down off dribble and get to rim where he can distribute or score. Knows when to attack basket in transition and knows when to pull the ball out and set up the offense. Advances the ball with the pass instead of the dribble.
Played last 2 seasons in Iceland

Chris Woods (6’6”, F, Pfeiffer University)
29 TP, 12 rebounds
Came in off the bench and made an immediate impact- scored in a variety of ways- finished at rim, good midrange set shooter. Led the break and scored with the foul. Loves to operate at mid post area- showed a variety of offensive post moves- nice hook shot with either hand. Very strong- gets to block- and holds his position. Can face up defender and go to work- has a good reverse pivot that clears out space- good FT shooter. Go to player offensively. Big time athlete- had a put back dunk in 1st half. Loves to go right and attack basket. Did a good job of leading the break- had a couple of passes that lead to layups. Good weak side rebounder on the defensive end. Made a huge 3 with 1:30 left in game to put Cheetahs up by 5- showing his shooting ability- shot looked a little flat and not much rotation- better player 15’ and in. Had 21 points at half time. Has previous professional experience in Germany. Player of the year at Pfeiffer.

Dupree Hall (6’8”, F, East Mississippi JC)
4 TP, 4 rebounds
High flyer- plays with a lot of energy. Active player- solid all around athlete. Runs the floor hard. Solid rebounder. Raw offensively- looks to be to much in a hurry when he gets ball in post. Needs to improve ability to finish through contact. Got caught out of possession on the defensive end several times.

On Sunday October 9, 2011, 18 players converged at the Fleming Center on the campus of UNCG to compete on the last day of training camp for a coveted roster spot on the newly established Carolina Cheetahs of the American Basketball Association (www.carolinacheetahs.com). Players were put through a full 2 1/2 hour practice consisting of 3 on 2 drills, defensive closeout drills, and several inter squad scrimmages.

The team, which is coached by former NC State player and Winston-Salem State assistant, Tim Wells, will begin its season on November 19th against the Lynchburg Legends. The Fleming Center, which holds about 1800 spectators, will be used as the home gym for the Cheetahs. Here are some of the top performers that I noticed today.

Long and lanky player. Very athletic player who plays above the rim. Shot blocker. Active on the glass, especially on the offensive end. Limited a bit offensively, but shows potential.

Big and strong. Does a good job of establishing inside and deep position in the post. Has a solid back to the basket game, displaying a variety of moves, including hook shots, spin moves, and reverse lay ups. Has good footwork and is surprisingly agile for his size. Shot a few questionable shots in the scrimmage at the end, but will be a load to handle inside this season. This will be Jones 4th year playing in the ABA. Previous stints have included stops with the Charlotte Crossover and Fayetteville Flight.

Hard worker, smart, and smooth- This is what Goodman’s game is about. Good inside/outside player- would be a great pick-and-pop guy. Showed the ability to guard bigger players in the post. Smart defender and with surprisingly quick hands. Runs the floor hard and gets a lot of easy buckets. Knows his role and excels at it. Seems to always be in the right place at the right time. Good shooter with feet set. Does a good job of drawing fouls. Great attitude. Played last season in Switzerland.

Smart- high basketball IQ. Floor general- controlled the pace. Solid ball handler. Does not try to do to much. Played last 2 seasons in Iceland.

One of the best shooters in the gym today. Great set shooter from 3 point range. Lefty. Competes in drills and games. Athletic.

Quick and shifty, with the ability to break man down off dribble and create his own shot. A player who you want with the ball in his hands with the shot clock winding down. Good 3 point shooter. Played last season in Bosnia, where his team won the championship.

The Little Rock Lightning, a new ABA franchise based in Arkansas, is beginning the work for their first season. With tryouts already scheduled for July 16-17, 2011, Bernard Brown, one of the team’s owners, is looking forward to the new endeavor. “We’re probably going to have a couple more tryouts,” says Brown, who is also networking in the Arkansas area to ensure that players are aware of the new opportunity.

The Lightning are not associated with the former ABA team that was located in the Arkansas area in 2004, the Rim Rockers. This team is a completely new team, but Brown is hoping to repeat something that the Rim Rockers did, which was bring some former Arkansas Razorbacks to the roster. The team hasn’t designated a coaching staff yet, as the season does not start until December 2011, but they are already working in the community.

Normally the Lightning expect to play between 30-35 games, but the schedule is still being determined. We will be featuring more information and follow ups with the team as they begin tryouts and of course, follow the team as they kick off their inaugural season.

Basketball Elite is proud to be a media partner for the the Little Rock Lightning and wish them much success in the coming year.