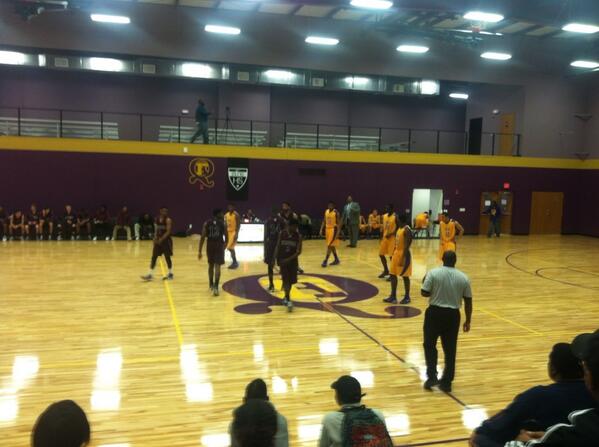 Although technically a home game for QEA, Wednesday’s match up in Winston-Salem, NC between Oak Hill and Quality Education Academy was a homecoming of sorts for Tyler Lewis, who played last season at Forsyth Country Day, just outside of the city limits. Lewis made a mark in last year’s Frank Spencer tournament, where he broke Chris Paul’s scoring record on the same floor as this game.

The last matchup between these two teams was decided by one point, but this year’s Oak Hill team jumped to an early lead and never looked back. After leading 21-5 at the end of the first quarter, they built too much cushion for QEA to overcome, ultimately winning 84-67.

Here’s some scouting reports and thoughts from the game:

Tremendous shot blocker- not incredibly athletic, but has great timing. Had 9 blocks in game tonight- and kept most of the blocks in play. Good positioning on the defensive end- sees man and ball. Has the ability to control the game without scoring. Physically imposing. Good defensive rebounder- grabs the ball with 2 hands and keeps the ball high. Throws good outlet passes- several of which beyond half court. Did not get one ball stolen or a pass picked. Underrated passer. Did not show much offensively tonight- other than put backs and finishing off of dump downs (Note: Oak Hill runs the Dribble Drive offense, which puts the C opposite of the ball- he did not get many post up opportunities ball side) He did not take any jump shots in the game- but looked to have good touch and a high release in warm-ups.

Weaknesses
Is in pretty good shape considering size- should continue to shed fat and add muscle. Still raw offensively- needs a go-to post move. Plays below the rim. Needs to improve P/R defense- comes out half-heartedly to shade and then gets back to man- this will not stop PG’s turning the corner at Purdue. Needs to play every play and stay active- looked disinterested at end of game to a degree- Oak Hill was winning the game handily. Slow lateral speed.

Overall
Great defensive player. Good attitude through out game. Told us he has developed a right hand hook shot. Will be a force on the defense end in college and beyond. Potential future pro.

Tyler Lewis (PG, 5’11”, 2012)
Strengths
Sees the floor well- has eyes in the back of his head- can see the play before it happens. Makes the game easy for everyone. Sets the pace offensively. Changes speeds well- great P/R player. Looked a lot better defensively than when we last saw him in the Frank Spencer last year. Quick hands and stayed in front of his man better. Tremendous court sense/IQ. Pure PG. Wasn’t consistent from the free throw line but was getting put on the line several times as he had to push the ball up against two defenders at times, who could not stop his dribble without fouling. All in all, Lewis’s game was a really solid performance.

Note: We also saw Tyler at CP3 camp this past summer and he did hold his own against the top guards in the country. The knock on Tyler has been his size and his defense, but he may be showing people that he is putting in the work to be effective all-around. Committed to NC State.

Jordan Adams (SG/SF, 6’5″, 2012)
Knock down shooter from 3- needs to follow shot. Perfect form- quick release. Plays below rim- looked a little out of shape at this point (early) in the season. Great rebounder for size. Jordan has flashes of fluid play and will suddenly impact the game in multiple ways, but appears to drift at times. His outside shot is deadly and barely touches the net. Committed to UCLA.

D’Vauntes Smith-Rivera (SG, 6’3″, 2012)
A combo guard who has great body control and was hitting from outside and getting to the rim in transition. Hard nosed, tenacious player. Worked hard on defense to get around screens and tried to get in the passing lanes. Strong guard who looks ready for the physical play of D1. Looks like a combo guard but looks much more natural playing off of the ball. (Lewis looks like the only true point on Oak Hill based on this game’s rotation). Committed to Georgetown.

James Ford(6’4”, G, 2012)
Good shooter, esp. from 3. Long and athletic- plays hard on both ends. Good defender. Had a putback dunk in the second half. One of the bright spots for QEA in this game, started off a little cold but soon started hitting everything. Can get above the rim with ease. Has interest from College of Charleston, St. Francis and Liberty but could be someone who gets a lot more interest this year.

Brandon Bolden (C, 6’11”, 2012)
Bolden played sparingly but looks like he has potential in the post, especially as he gets stronger. Really did not see enough from him tonight, especially when matched up against Hammons. Did not start in this game. Committed to Georgetown.