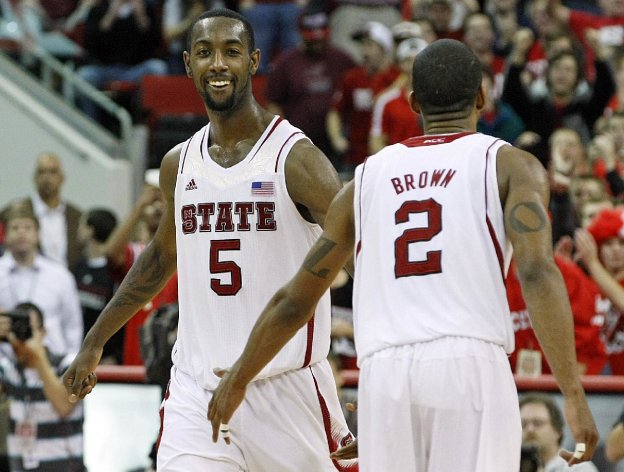 Strengths
Despite playing just a little over half of the minutes he averages, Leslie made the most with his time on the floor and scored several key baskets for State. On the offensive side of the ball, Leslie was virtually unguardable in one-on-one situations. He is a big time above-the-rim athlete with good quickness and explosiveness for a PF. He uses his quick first step to drive around most defenders his size where he can score around the rim. He showed an array of mid-post moves using jab steps, spin moves, fakes, and sweeping through, to get by his defender and to the rim where he was able to score at a good rate because of his athleticism. At his best offensively in isolation situations in the mid-post and short corner areas where he can face the basket and has room and time to create offense for himself. Wake had to send the double team after scoring with single defender several times. Also showed a nice high half-hook late in the second half. Went 3-6 from FT line this game, made his first two. He does a nice job of using his legs on the line and shot has good arc.

Defensively, he has the tools to be good defender. Played last 10 minutes of game with 4 fouls without picking up 5th and even had a blocked shot in that stretch. Has potential to be good shot blocker at next level with his length and athleticism. Solid rebounder, especially on the defensive end, where he is averaging over 5 rebounds a game on that end of the floor.

Weaknesses
Defensively is where Leslie struggles the most. This is not because of lack of speed, quickness, or size, but is mostly due to lack of effort (low motor), strength, and positioning. On the games opening defensive series he didn’t close out on an open perimeter shot and let Moto have a wide open 18’ shot. Doesn’t seem to exert any more energy then he has to. Low motor on both ends. Not effective with out the ball in this game tonight. Poor screener. Needs to get lower in his defensive stance- got beat off the dribble several times this game partly because he was not low enough or didn’t stay in good defensive stance. He tends to fall for too many fakes and gets thrown off balance too easily. This contributed to his foul troubles tonight. He picked up his 4th foul with 17 minutes to go in the second half, after picking up his first 2 half way through the first half. He also tends to get into foul trouble because he is too often out of position and tries to recover late and go for the block or highlight defensive play. Was called for two goal tending violations in the second half- both were obvious and were not smart decisions on his part.
Offensively, he was excellent in the mid post area, but struggled to secure deep post position mainly because of poor lower body strength. He was getting pushed and bumped off line too easily in the paint and needs to get stronger. Ball handling needs to improve also, handle is too loose. Had a couple of TO’s early in the game and showed visible frustration.

Did not attempt any shots outside of 10 feet this game, besides FT’s. Is shooting 55% from the field so far for the season, which is mainly because most of those shots are coming in the paint. Has only attempted 4 three-pointers on the season and has made 1. He is shooting under 30% from beyond the arc for his career with just under 50 total attempts. He needs to improve his range and his outside shooting consistency. FT shooting needs to improve a bit as well. To his credit he is shooting 64% for the year , which is almost 5 percentage points better then last year. He missed 2 FT’s this game with under 30 seconds to with a chance to go up 1. His elbow sticks out to a degree which leads to inconsistent misses on both sides of the rim.

His motor needs to be higher. Body language was poor during most of game. Argued with officials on several calls and showed visible frustration at several points. Looked like he was coasting and going through motions at several points.

Overview
One of the worst games I have seen Leslie play, but he still managed to score in double figures and grab 5 rebounds in under 20 minutes of playing because of foul trouble. He did impress however with his performance in last 4 minutes of game…playing with 4 fouls during which he had several big baskets and rebounds.

When Leslie plays hard and with determination, he is one of top draft prospects in country. He has the tools, solid upside, and the offensive arsenal to contribute at next level as a PF. His athleticism, quickness for his position, and ability to face the basket in the mid-post will translate to the next level, and is part of the reason he is considered to be a first round pick in several mock drafts. It will be interesting to see if his motor and effort improve as the team enters conference play.