Strengths
Physical defender who bumps cutters. Closes out with high hands. Active and quick hands defensively-makes plays- got multiple deflections tonight and guards the inbounds. Made the proper defensive rotations and has good bball IQ. Looks to make contact and box out on all rebounds. Hustles and plays hard. Incredible offensive rebounder because of hustle, vertical leap, and timing. Relentless motor.
Secures rebounds strongly with 2 hands.

Excellent athlete who runs the floor well and has good hands. Quick jump. Excellent in transition, gets out quickly. Very good slasher who can finish with contact. Head hunts on screens. Strong frame. Shot has good rotation and he has solid mechanics with a nice follow through. Showed he was capable to knock down the open corner 3 off the pick and pop play- hit back to back 3’s at a critical point in this game with under 4 min to play. Has a smooth FT stroke. Team player who shares the ball and does not force shots. Is in great physical condition- played a game high 37 minutes in this contest. Good high-low passer and is an underrated passer in general- better then his assist numbers would indicate. Does a good job of sealing inside.

Weaknesses
Struggles to change directions with the ball off the dribble. Needs to improve ball handling overall, dribbles with head down. Inconsistent shooter from 3 and needs to speed up release. What position is he on the floor? Struggled to finish around the rim tonight but hustled and was able to board most of his own misses.

Went for too many ball fakes when defending the perimeter and needs to improve lateral quickness.

Overview
Another solid performance tonight from the senior forward. Had 20 pts and 10 rebounds in his 1st game and led his team in scoring tonight in another win. Transfer from D1 Western Carolina, where he started last season. Should have a big year on a young team that needs his toughness, leadership, and competitiveness.
Needs to improve body language when things are not going his way, showed visible frustration on missed shots and fouls. Is supportive of teammates on bench and in game and listens to his coaches.

Needs to communicate more on the floor. Calls out screens but would like to see him talk more in general, but is a winner and a competitor.
Ross shouldn’t have a problem finding a role to play at the next level, either in a 2nd division European country or in another country/continent. His athleticism, strength, and rebounding ability will be highly coveted by a pro team. 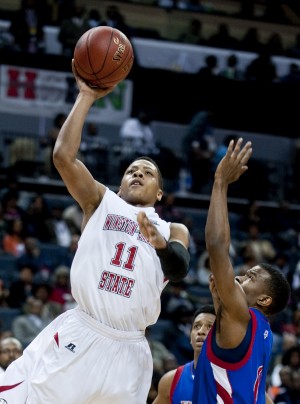 We at Basketball Elite focus primarily on HS basketball, but we also scout college and professional basketball as well. We have scouted Winston-Salem State (NCAA DII) basketball in the past. Torez Young is a hometown kid that finished his HS career at Calvary Baptist in Winston-Salem. He finished 2nd in school history in points and 1st in assist and steals. These numbers were good enough for him to be a McDonald’s All-American nominee. Torez chose to attend Grambling State over offers from High Point and Wright State amongst others. After sitting out his first year at Grambling, he started 21 games the following year and was voted onto the 1st Team All-Freshman in the SWAC conference. Young transferred to Junior College- Florida State College the following year and led the entire state of Florida in assist. Halfway through the season Young signed with WSSU to be closer to home. After a disappointing year because of a torn ACL, Young will be counted on heavily this coming season for a talented WSSU squad.

James Blackburn has scouted and watched Torez’s game develop since his freshman year of college. He is a prolific scorer who can shoot the ball from the perimeter as well as beat you off the dribble. He is athletic and possesses decent size and length for the PG position. He is at his best in transition and he is an excellent passer.

Basketball Elite caught up with Winston-Salem State junior guard to talk about his off-season training, goals for next season, and his plans for the future.