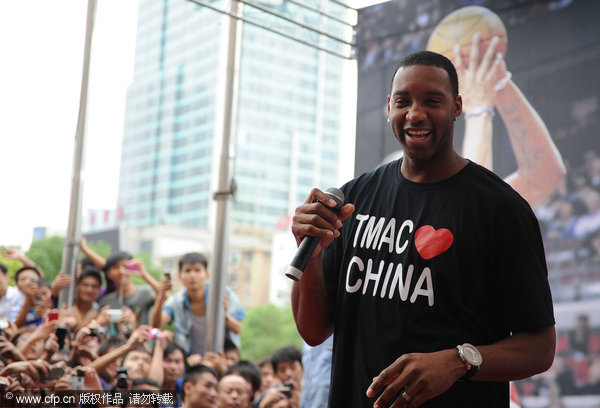 People in recruiting circles are well aware of the dynamic 5’6″ guard Aquille Carr, who had committed to Seton Hall but now seems to be signed to play professionally in China as he continues to work towards a potential NBA career.

What you might not know is that Tracy McGrady, who was on hand with the Spurs in their narrow loss to the Heat in last week’s NBA finals, helped Aquille when the Chinese team approached him to sign a contract, as reported here by our pal @rodgerbohn:

“How does it feel to have your first CBA contract offer?” Qingdao Double Star owner Max Shicanbin asked Carr.

Shocked, Carr said that he would have to talk with his agent. But Tracy McGrady stepped in and volunteered to assume the role, playing both sides of the fence with the owner of the club he played for until he joined the Spurs.

“We want stability,” McGrady said in his new role of player representative. “We also want a guaranteed contract and position on the team.”

SLAMonline had the chance to talk with Carr after the game, and he was humbled by the opportunity to spend an entire season in China.

Regardless of what comes of this story, it’s important to understand what McGrady actually did for Carr. It’s not a grab for an agent’s cut of the pie – it’s a move by a seasoned veteran who understands how a young player could get run over by the business. You see, in most of the sports world, contracts are not guaranteed as they are in the NBA. That’s true even in the United States, but it’s a major issue for professional athletes playing in many leagues around the globe. You show up on a Tuesday to play for your new team, you play two games, and you get cut. There is very little stability.

McGrady’s move truly is a veteran looking out for a young player.