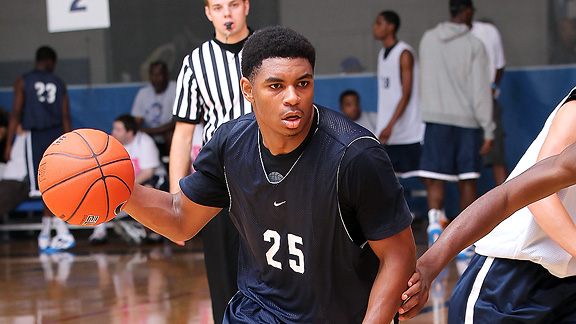 Trey Mitchell 6’4 190 Jr. Olympic HS Charlotte (NC)– In a conversation with Trey yesterday he told me that Hampton, Memphis, East Carolina, and Appalachian are showing him the most interest.

Sindarius Thornwell 6’4 180 Jr. Lancaster HS (SC)– Comfirmed he has over 16 offers by phone today, the 2nd. Those include South Carolina, Tennessee, Clemson and Oregon State. Ranked by ESPN as the #1 recruit in the class of 2013 in South Carolina.

James Demery 6’4 170 So. The Oakfield School Greenville (NC)– High flying guard is getting interest from Kansas, Virginia Tech, NC State, South Carolina and East Carolina University. He is ranked by ESPN as the 12th best guard in 2014.

Christian Hairston 6’7 180 Jr. Greensboro Day (NC)– Confirmed to me via text message that Oklahoma State University has already offered and he is recieving high interest from Appalchain State. Should be a very talented Greensboro Day School this season.

Quinton Ray 6’0 165 Jr. Middle Creek HS (NC)– After a phone conversation with Quinton, he told me that Mercer University, Gardner-Webb University and North Carolina- Central are recruiting him the hardest right now. Also getting interest from Texas Pan-Am and Radford University.