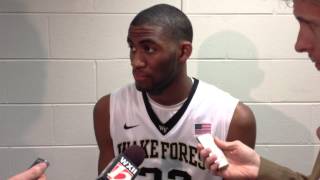 Strengths
All of Aaron Rountree’s strengths could be summed up very easily in a couple of words…”Plays Hard”. Other words that could be used would also do a good job of defining his game include “Active”, “Energetic”, and “Tenacious”. Rountree is a coach’s dream in that he plays every possession like its his last, diving on balls, sacrificing his body to save a ball, blocking shots, and running the floor. He plays 100% all the time. His high motor, activity level, and energy level culminate in nearly every part of his game on both ends of the floor.

Defensively is where Rountree makes the biggest impact. He is extremely versatile and is capable of defending 3 different positions, from a 2-4. He uses his long frame and great wingspan to corral and hound the opposing teams ball handlers. He is a tremendous defender, to put it mildly. Wake uses him at the top of their zone pressure full-court defense and he causes problems with not only his length and activity level, but his foot speed as well. He can cover a lot of ground quickly and is capable of sliding his feet and staying in front of quicker/smaller players. For a 6’8” guy he is above average in his lateral quickness. He plays the passing lanes well and gets a ton of deflections. Even though he was only credited with 1 block this game and 0 steals, he must have deflected or gotten his hands on almost 10 balls. Many times even when he wouldn’t get a steal or deflection this game he forced the opposing PG to have to call a time out because of pressure or he would make a mistake like travel or make a bad pass that led to a steal for a teammate. He is third on the team in total steals for the season and as his minutes increase I can see him leading the team in that department by the end of the year. Smart defender- at one point on the press- he got a hand in and deflected ball handlers dribble- he picked it up- Aaron left him and denied closest man- he had to call TO. Gets around screens and does a nice job of caboosing off the ball screens and contesting shots. Blocks and influences shots- contests shots on the perimeter. Leads team in blocks even though he is only averaging 13 minutes a game. He is also a terrific rebounder on both ends and he attacks rebounds both in and outside his area- crashes offensive boards nearly every play.

Offensively Rountree knows his limitations and provides positive contributions in several areas. One area where he has impressed me with is his playmaking ability. He is averaging twice as many assists than turnovers on the season and makes smart passes to open teammates. He is underrated and willing/unselfish as a passer and his IQ for the game is also underrated. Even though he isn’t a great ball handler, he has shown repeatedly this season and did so again tonight, the ability to drive the ball and kick to open teammates. He also knows how to enter the ball to the post. He is at his best in transition offensively, and is capable of finishing above the rim. He attacks the basket and draws fouls. Part of that is due to the fact that his shot is inconsistent and needs work, but it also speaks to his aggressiveness and what type of player he is. Didn’t shoot anything outside of a FT this game- but he is shooting 50% for year from the 3-point line. I watched him shooting in warm-ups and he has a high release and good arc- but needs to work on mechanics. He is also shooting over 60% from FT line and the field.

Weaknesses
Rountree is still raw in several ways, most noticeably offensively. His shot is inconsistent, even though he is shooting over 50% from every area, as noted above. His mechanics are flawed and he flicks the shot more so then shooting it. He puts his left hand on top of the ball slightly and his left elbow is out. The ball doesn’t get much rotation either. On the FT line he doesn’t really bend his knees and uses mostly his arms in his shot. He also needs to get stronger and fill out his frame some more. His dribbling isn’t bad at this stage for his height, but it needs to get tighter and he cant really change directions/speeds with ball at this point either. He didn’t show the ability to create his own shot or get by quicker players on the perimeter consistently. Also has a tendency to put ball over head in half-court situations.

Still tends to make some freshman errors, which you would expect, especially early in the season. These include being out of position and turning his back to the ball at times. He plays so hard and contributes in so many ways though that it is hard to take him out after a mistake.

Overview
Another strong performance tonight from Rountree to help lead his team to a much-needed win over Furman. I don’t think I have ever written so much on a player who had so little to show in the box score, but it just reinforces everything I noted above about the way he plays. He is a fan favorite and its easy to see why. He makes team better when he is on the floor and is active teammate while on bench as well. He is a coachable player who is a solid teammate and displays a great attitude at all times. He hustles on both ends, provides great energy off the bench, doesn’t complain, just competes. He is someone you want on your team. He is a leader and encourages his teammates.

I would love to know Aaron’s +/- score- on the floor as it seems his team goes on runs when he is in game and he makes so many positive contributions.
In my opinion he is the best pro prospect on the team and it would not surprise me if becomes a 1st round pick after finishing his career at Wake. Depending on how fast he improves and progresses on the offensive end, he may be a first rounder after his junior year. His defense, length, high motor, and offensive limitations remind me of Michael Kidd Gilchrest from Kentucky. Rountree’s rebounding and defensive skills will translate at the next level nicely. He has a ton of upside and will continue to improve as he gets more time on the floor.