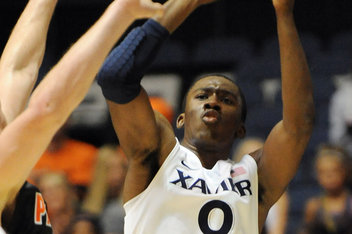 Strengths
Semaj is able to play either guard position equally well, which you do not frequently see on the collegiate level. Physically superior to most of his opponents, he is a legitimate 6’3” with solid length and excellent athleticism. Offensively, Semaj is at his best in transition as he gets up the floor quickly with or without the ball. Once he has the ball he does a great job of attacking the defense and drawing fouls. He is a terrific slasher in the half-court as well and uses his superb athleticism and first step to get to the rim. Played more of a playmaker role in the first half, but became more aggressive offensively and looked for his shot more in the second half. Was able to get to the line, which is where he scored most of his points tonight, going 8-10 (Is not shooting well from FT stripe for the year- but has nice stroke- and did well from line this game.). Did not shoot much from the perimeter this game, other than a couple of midrange pull-ups off the dribble, but showed a nice stroke with good lift and release. Did not see him shoot any set shots.

Made good decisions off the P/R and hit the roll man several times to set them up for good shots. Keeps head up and makes the right decision. Tight dribble; highlight reel ball handler who can slither his way through traffic w/ the ball in his hands; has a really nice in-and-out dribble move. Capable of scoring tough shots from tough angles and can create his own shot. Solid passer overall who doesn’t dribble when he doesn’t have to; gets rid of the ball quickly and passes on time; doesn’t waste his dribbles; dribbles to create passing angles; constantly scanning the floor; knows where pass is supposed to go. Capable of running an offense and will only get better as he plays the PG more. Smooth and fluid- can change his shot mid air. Also does a nice job of using body to protect ball. Changes speeds well and he has that extra gear to attack the rim. Does a nice job of slithering to the rim and finishing in creative ways. Sets his man up to go off screens on the ball and away from the ball and moves pretty well without the ball (vital in Xavier’s system).

Good defender at this point who can defend on the ball and off the ball. Stays alert and keeps solid defensive stance when playing off the ball. Capable of being elite defender at next level as he possesses a solid wing-span, athleticism, and good defensive instincts (leads team in steals). Contests shots on the perimeter.

Weaknesses
Needs to get stronger frame; attacks rim hard and is not afraid of contact, but needs to improve upper body strength to avoid injuries at next level. Got caught on screens away from the ball too easily. Doesn’t seem to go all out on every possession. Needs to be more consistent and keep a high motor.

Can go either way but is more explosive going to his right and prefers to attack going to his right. Decision making could stand to improve to a degree; gets out of control at times in transition and gets ahead of himself, but is averaging more assist then turnovers so far this season.

Didn’t see him shoot much outside this game. Didn’t see him shoot any three-pointers or set shots. Must improve FT stroke- shoots less then 60% from the line. Doesn’t have a bad stroke, but doesn’t have the confidence to shoot it much from outside at this point- has attempted only 13 three pointers through 13 games this season (including this one) and has made only 2. His shoot will come around, needs to get more reps and shore up consistency.

Overview
Struggled for the most part this game and fouled out with less than 2 minutes to play in the game. Had a tough time finishing his drives and went 3-11 from the field. Despite these numbers, Semaj’s game is built for the next level as he excels in isolation and P/R situations. At the pro level, given more room to operate and freedom in the offense, his game should progress. Xavier starts him at the SG spot, but he would play the PG at the next level. Did play PG the majority of game after starting at the off-guard position.

Is a two time A-10 Rookie of the Week so far this season and entered the game leading Xavier in ppg (13.4), asp (5.1), and spg (1.5). Went to Brewster Academy and helped lead team to a 33-1 record a prep school national championship. Was a 4-star recruit out of HS and was a top 5 PG in his class nationally.

John Wall/Dontell Jefferson type player- same body type, athleticism, quickness and attacking the rim style of play. Has a high upside and has is an intriguing overall prospect. NBA teams love quick athletic guards who can both score and make plays. Scouts should keep an eye on his progression as both a shooter and his development into a playmaking PG. If he continues to pile up assists and can improve his 3-point shooting, don’t be surprised if he leaves school early for the NBA.