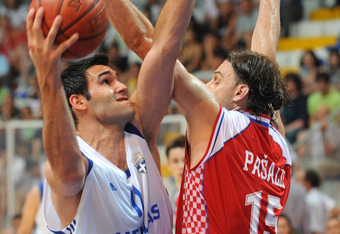 Again, thanks to James Blackburn for his work scouting the 2010 Overseas Evaluation Camp. Here’s James player evaluations from the camp, which he not only covered for us, but also was a camp scout.

These players were some of the top performers of the camp and definitely improved their stock and their chances of playing overseas.

Good Floor general, good handle, creative with ball- can use both hands. Good shooter and good vision. He is stronger than he looks too. Sometimes over dribbles.

Has great footwork. Great shooter with 3pt. range- also displays good form. Plays good D without fouling- always has hand in shooters face. Has great vision and makes good, smart passes. Good rebounder as well. Very smart and rotated on Defense in games well. Was matched up with Cameron Stanley on Saturday and matched him shot for shot. One weakness is his size. Is vulnerable to being posted up by bigger 2G’s. He is athletic but needs to get stronger to keep guys from establishing position so close to basket. Hustles on both sides of the ball and does whatever it takes to win. One of the top 3 players at the camp in my opinion. He will be making money somewhere this coming season.

Does not pass the look test at all- but this kid can play with the best of them. Scored in bunches and let game come to him. Was always in the right place at the right time. Moves well off the ball. Good left hand. He is not fast or athletic but picks his spots to score. Plays good D and moves his feet despite the fact that he often gives up size and speed in his match up. Good shooter- though his shot was not falling in games- displays great form. Uses screens well. Very smart player- filled the open lane- he can handle the ball and finish on the break. He will surprise you. He also displayed good endurance- when most players were getting tired and winded after playing several games- Seth still had energy. Good solid player on both ends of the floor.

One of the quickest guys at the camp- very good handle- has the ball on a string. Good shooter who can also get the rim and finish.

Very athletic- kind of like a Anthony Randolph type. LH who can finish with right as well with dunks. Displayed 3 pt. range in games. Good footwork. Needs to get stronger. Project guy- still has a lot to work on.

Tayshaun Prince type. Lefty with smooth jumper with 3 pt. range. Would rather take the ball to the hoop where he can finish with a dunk. Athletic with long arms. Smart player who is a good rebounder on both ends of the floor. Talked to one of his friends at the camp who plays for Virginia Univ. and he said that Daniel will come to open gyms at UVA in the summer and does more than hold his own.

Has definitely improved since his Wake days. Has gotten stronger and has increased his range. He is a smart player- will post up smaller defender and take bigger defender outside. Has developed a smooth jumper- set shooter who can also put it on the floor. He is a decent athlete as well. Needs to improve Defense a little.

Good hustle player- undersized – but is very active on boards and on defense- boxes out his man on every possession. Needs to get stronger- has a raw offensive game- Ben Wallace type- but not as strong.