Duke basketball landed a talented junior in Alex Murphy (SF, 6’8″, 2012), who has stated for some time that Duke and Florida were the two schools that were recruiting him with the most intensity. Murphy took an unofficial visit to Durham and the Duke campus last month.

Murphy is a slender forward with a good shooting touch, if a little bit on the slow side with his release. Naturally, comparisons to current Blue Devil Kyle Singler are going to be made, but Murphy definitely will need to add strength and does not look like he’s ready to play much post at the college level yet, but has a good offensive game and can handle the ball.

Anderson is extremely proud to be a part of the American squad. “We’re doing good,” he said. “This is a great opportunity I have playing with the best players in the grade ahead of me.” Anderson is only sixteen and is the youngest player on the team by a couple of months. “I’ve gotten learn a lot from my teammates,” stated Justin. While they are thriving and going for gold, Justin continues to play his game and play his role.

His game is exciting to watch. He is energetic and lively on the court as he is a defensive presense. Anderson slashes to the basket, as well. He is an excellent scorer and very versatile. The only part of his game that hurts his versatility is his ball handling skills. The 6-foot-5 small forward needs to gain a handle in order to take his game to the next level. However, his game is great. At one point he was a top fifteen player in the class of 2012. Now he is in the top forty.

Currently, Justin’s recruitment is steady and he is drawing interest from tons of big name schools. “Right now, the five schools who are recruiting me the hardest are Maryland, Virginia, Duke, Texas and Oklahoma,” he said. “I would say that is my top five in no specific order.” However, one school has to stand out to Anderson as they are the only ones to offer. Maryland is the only school to give Justin a scholarship at the moment. Along with that, they are very close to him with his school being in Maryland. One of his former teammates, Terrence Ross, was once committed to the Terps.

Once he gets back to America, Justin will run with his Boo Williams AAU squad into the Nike Peach Jam in Georgia and AAU Nationals in Florida. As he plays some more AAU in the live period against some of the top players in the country, coaches will notice who he is and why they want him. Look for the rest of July to be a real eye opener for colleges on Justin Anderson.

Hey, if you like this kind of basketball coverage, do yourself a favor and sign up for the BasketballElite.com newsletter, which is free for basketball lover 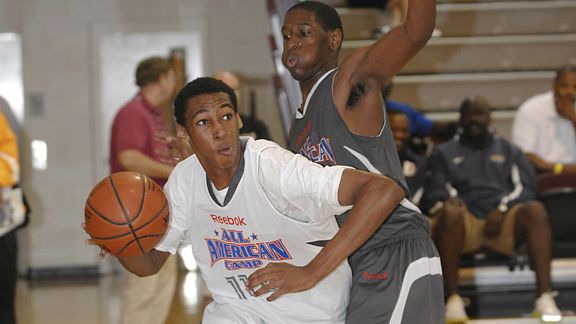 The Florida Gators have pulled themselves out of the recruiting race for Brandon Knight (PG/SG, 6’3″, 2010), the star scorer who is down to a handful of schools. This move by Florida leads us to believe that Florida knows Knight is headed elsewhere, and right now all signs point to the Kentucky Wildcats; however, that still remains to be seen, and with Knight taking his time, anything can happen.

It also means the Gators may be making more time to focus on getting Austin Rivers (PG/SG, 6’4″, 2010) to completely commit to Florida. The recruiting situation with Rivers is odd; he continues to say he’s committed to Florida while also evaluating Duke. That means he’s not committed at all.