Note- Noah did not play for the Bulls due to injury.

Strengths- Strong/athletic/Explosive PG. Slashes to the rim hard and finishes strong. Protects ball well when attacking the basket. Showed an improved jump shot- has ability to shoot pull up off screen and roll situations. Good FT shooter and gets to the line a lot b/c he attacks the rim. Has an unusual 1 handed floater/pull up shot that he along baseline. He shoots it when he is off balance, but he hits it with surprising effenciency. Well conditioned player- played almost the entire game, but never seemed to slow down or lose speed or momentum.

Weaknesses- TO prone- jumps in the air to make passes most of the time. Forces the issue at times- shoots bad shots- plays out of control at times. Needs to continue to work on 3 pointer and show that he can hit it consistently.

Overview- One of Rose’s best games of the season. Rose has improved every year and continues to establish himself as an elite PG in the NBA.

Strengths- Knock down shooter- who can hit the set 3, the set midrange, and has the ability to come off screens and shoot- very quick release. Underrated passer despite his 0 assists. Is a good defender especially against another shooter- shut down Kyle Korver this game.

Weaknesses- Needs to do a better job of finishing with contact at the rim. Has a tough time of creating his own shot against a good defender.

Overview- Allen shows game in and game out why he is the leader of 3 pointers made amongst active players. Defenders respect his shot so much, that Allen is able to get to the rim in a couple of dribbles because the defense plays so tight on him. Does not get the credit he deserves of being a solid overall basketball player who really knows the game, because of legendary shooting ability.

Strengths- Changes speeds very well. Showed a nice touch on up and under lay ups and had a nice left hand finish over the defense. Great passer- if someone is even remotely open, they will get the ball. Poised, under control, a great leader. He seems to never be rushed or in a hurry. A true PG- he does a great job of directing traffic and directing the offense- making sure that guys are in the right spots to run the play. A true quarterback on the court. Does not rush his jump shot- good form- he knocked down a few 17’. Very quick hands on defense. Smart player and defender.

Weaknesses- Some times over penetrates and gets his lay up blocked. Needs to do a better job of getting over/ fighting around screens and overall P/R defense. Needs to continue to extend range of jump shot. Did knock down a couple of jumpers, but needs to make it consistent so the defense will respect it.

Overview- May be the best pure PG in the NBA this side of a healthy Steve Nash. Is like another coach on the floor. Directs the offense and is not afraid to tell fellow future Hall of Famer teammates where to go and what to do. People have been saying for years that if Rondo could develop a decent jump shot, he would be an all-star level PG. Well I am saying he is already an elite PG with out a shot, once he improves his midrange- he will undoubtedly be the best PG in the league.

Strengths- He didn’t necessarily fill up the box score but this was a solid showing for the rookie out of Notre Dame. Strong and physical player. Very good rebounder who boxes out well. Is not very athletic but makes up for it with toughness. Is a good defender, who hedges screens well to stop the ball handler from turning the corner and then gets back to his man quickly. Hustle player who gives 110% on every play. Has a low release on his jumper and shoots it from the side of his head, but he showed this summer that he can shoot and has 3 pt range. Moves his feet well for his size.

Weaknesses- Needs to be more of a threat on offense. Had a rookie mistake at the end of the 3rd quarter- passed the ball when the shot clock was at 1, when he should of shot.

Overview- Very smart player. I thought he deserved more minutes this game. Was coming off his first double-double the night before in a win over Toronto. Even the Celtics like him, Coach Rivers minutes for the rookie have been erratic. Minutes are soon going to be hard to come by when Perkins and Garnett come back from injury. I believe Harangody will become a good player in this league. Reminds me of other players who are not the greatest athletes, but have found ways to be effective in the NBA because of heart, hustle, rebounding, defense, and strength. Such players include ex-Celtic Leon Powe, current Celtic Glenn Davis (who eats a lot of his minutes) Dejuan Blair, and Paul Millsap. 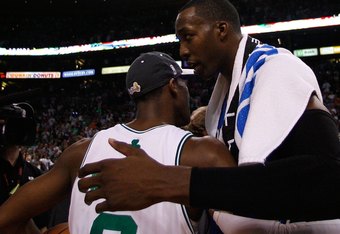 The Boston Celtics were not supposed to be returning to the NBA Finals.

They were, according to the prevalent thinking among fans and media, supposed to be past their prime.

They were supposed to be beaten easily by Lebron and the Cleveland Cavaliers, or at least by the steamrolling juggernaut from the south, the Orlando Magic.

As the Celtics gathered at mid court to celebrate their return to the championship series, Boston fans cheered and NBA fans wondered: what happened?

How did the Celtics, supposedly a team of old, over the hill veterans who couldn’t win consistently in the regular season, suddenly look so amazingly good?

The answer lies in two parts, both equally important.

The first part is more due to the nature of the modern NBA, and how an experienced team approaches the regular season.

It’s no secret that the NBA season is far too long, with too many guaranteed contracts. As a result, teams like the Celtics, much like San Antonio has done in previous years, will pace themselves all season. The coaches rest their older players much more during the season, trading the meaningless wins and division leads for a spot in the playoffs, when it suddenly matters.

The NBA regular season is nearly a preseason, and the playoffs are the actual season. Players try a lot harder in the playoffs. Suddenly the lights come on, fans are tuned in and players want to win. And that’s why players like Lebron suddenly look less incredible and more like ‘just a pretty good player’. The NBA has loads of talented guys, and when playoff time arrives, the experienced players suddenly flip the switch and pour it on.

So the Celtics have experienced players in spades, mixed in with the energy of youth, with Rondo, Perkins and Big Baby Davis providing the athletic exuberance to fit in with the older players’ basketball smarts.

But the second big factor as to why the Celtics have been winning isn’t so obvious.

Sure, they’ve got Garnett back, but even though his intensity is great and he has a nasty mid range jumper, he’s not the raging athletic he once was. He’s not the only reason the Celtics are winning.

To find that out, you’ve got to look at a single, easily missed statistic.

For the last seventeen games in a row, no player has led in scoring back to back.

What does that mean?

It means the Celtics have a lot of weapons, and whoever you leave open is going to kill you. All they have to do is figure out where your team is weak.

This only works because the players understand it. With a lot of teams, the star player is going to get his shots no matter if he’s being triple teamed or not. And if a team has two star players but both are being held in check by the defense, the depth of most rosters is not enough to get points.

And so the Celtics have put aside egos, and ignored the silly rantings of the media. If Ray Allen torches an opponent one night, journalists will write about the lack of scoring from Paul Pierce or Garnett.

A few nights later, when Allen is being smothered and Pierce is lighting up the scoreboard, it’s Allen who the writers will blast.

But none of that matters, because winning is the thing, and for the Celtics, it’s working perfectly.