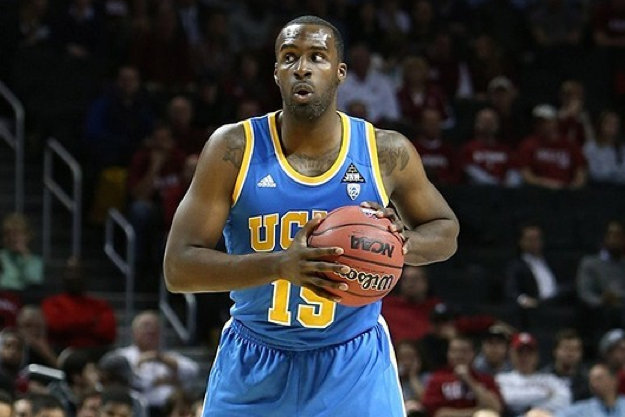 Strengths
Muhammad was born to score the basketball and he does so in a variety of ways. He has good scoring instincts as he showed the ability to score from beyond arc, knock down midrange pull-ups, and score in post up situations. He is not a high flyer, but is an above average athlete, more explosive then I have seen from him in the past. He tried to dunk in traffic several times and drew the foul. I like the fact he was attacking the rim hard and went in strong. Solid FT shooter when he goes to the line.

One of the areas Muhammad impressed me the most this game was his shooting. Immediately upon entering the game, he hoisted an 18’ jump shot in transition and drained it. Not a smart shot, but it went in none the less and spoke of his confidence as a player. Has a good looking left hand stroke where everything is in balance and stride. He shoots the ball in rhythm and is on balance. He gets his feet square to rim and gets good elevation and has a high release. Even his misses are good when he shoots- misses are straight and off the back of rim. Missed his first couple of threes and then got it going at near the end of the game. Made an immediate impact when he first got on the floor- scored and assisted on his first two offensive possessions.

Average on-ball defender, not as good as he was touted out to be. He did a decent job in the first half of bumping cutters and holding his ground when defending the post. He has a good combination of size and strength- won’t get pushed around on either end in college and won’t have a difficult time at the pro level. Hustles and even dived out of bounds once to save a loose ball in the first half.

Weaknesses
Muhammad didn’t look comfortable on either end of the floor for the majority of the game and looked rusty and somewhat out of game shape. Part of this is to be expected as this was his first college game played after a 3-game suspension. His handle is below average at this point and he must improve his ability to go to his right. Loves to go left at this point went that way the first 2 times he put ball on floor. Georgetown’s defenders recognized this and started to beat him to the spot resulting in a turnover. Scouting reports at the college and pro levels will harp on his inability to go right and take advantage. Drop dribbles the ball too often- very quick to put ball on floor- happened several times in first half. Needs to do better job of finding gaps against the zone. Looked sloppy, trying to find rhythm against zone offensively- looked a little rusty from having not played in a while. Telegraphed a pass first time he touched it in second half and got it stolen. Would have liked to see him attack the zone off the bounce and not be so passive.

Shabazz looked his weakest at the defensive end of the floor. Looked completely out of his league several times on this end of the floor and looked lost. He was the last UCLA player back down the floor each time on D, especially in the second half- must hustle back harder on defense- showed he was not in game shape. Got caught out of position defending his man off the ball a couple of times. Didn’t see the ball and got caught being lazy trailing his man when he cut- Georgetown player spun and pinned him because he didn’t beat his man to spot and his man scored easy basket. Slow laterally- got beat off the bounce several times this game. Poor rebounder- collected only 1 rebound while on the floor for 25 minutes. Doesn’t really attempt to rebound outside his area. Better on-ball defender at this point then secondary defender- but must improve at both.

Overview
Didn’t start and he entered game at 14:12 mark in first half. First game back after being suspended 3 games by NCAA for recruiting violations. Started 2nd half on bench as he did in the first half.

Didn’t do a good job on the defensive end this game, but should develop into a solid overall defender with a solid frame, athleticism, and work ethic. He is not unlike other freshman however in that he is struggling early this season with his off the ball defense- out of position, getting beat to spots. Georgetown makes it especially tough because they run the Princeton offense with lots of screens and cuts and they make you defend through the entire shot clock.

Muhammad is the consensus number 1 pick in most NBA mock drafts. I do not see him getting drafted number 1 or being deserving of a number 1 pick, especially after this game. To his credit, he did still score 15 points, shooting 50% from the floor, and doing so in less then 30 minutes playing time. But he didn’t look comfortable on the defensive end and struggled to create his own shot most of the game- both are red flags at next level, where he will be asked to guard the likes of LeBron James, Kevin Durant, and Rudy Gay on a nightly basis. I expect him to continue to improve as he plays more games and gets his legs back and becomes more accustomed to the college game. He will get drafted in the top 3 this year, but in a better draft he would probably fall to around 9-12 or so, at the end of the lottery. Scorers such as Muhammad come around every 1 to 2 years, even if they are the #1 HS player coming out.

His game reminds me of Harrison Barnes and I think they will have similar careers. Both players are not only good basketball players, but are good kids and hard workers. They both have similar demeanor on the court and have similar skills as well as similar question marks. He will be a good, but not great, NBA player. He will start on a below average team and put up somewhere between 13-18 ppg for his career. Those are solid numbers, not necessarily number 1 pick numbers, but good none the less. His game doesn’t remind me of OJ Mayo, but his situation does and I think he will follow a similar career path of Mayo as well. Mayo was the #1 HS player/recruit heading to USC. He also had run ins with the NCAA and was a dime a dozen scorer. He is just now coming into his own in the NBA, 5 years into his career. We will continue to monitor Muhammad this season to see if he can justify his status as the number 1 pick in this coming NBA draft. This is only one game (first one at that), and you don’t ever want to put too much weight scouting him one game (Basketball Elite staff likes to scout a player at least 3 times before making judgments about players).