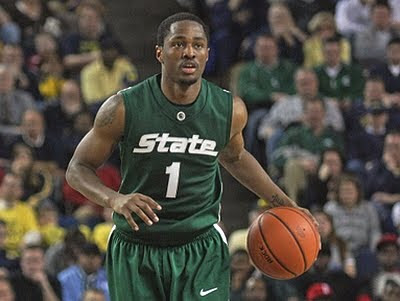 Michigan State has had some early bumps in the road after opening up ranked at #2 in the country. That doesn’t mean they don’t have talent, but it still remains to be seen whether they were too highly ranked or whether their early season loss is just a bump in the road.

The Spartans rely on an backcourt that is undersized but is loaded with experience, not just in years but in big games played, having been to the title game and deep into the NCAA tournament multiple times. Mixed in with some experience at the forwards and post players are some new faces that bring the size. Michigan wants to run the inside-first play where the guards work to get the ball into the post, especially when Garrick Sherman is in. They alter their approach somewhat when Draymond Green is on the floor, as his style of play can open up the guard play and create space for the mid range game.

Michigan State has to improve their rebounding in order to be effective against teams with talented big men. Right now, Michigan State is playing the post with power forwards, even though both Sherman and Adreian Payne are 6’10”, neither is pure center and neither could be considered a dominant interior rebounder. With Derrick Nix out and rumored to be considering a transfer from Michigan State, the lack of muscle in the Spartans’ frontcourt is their biggest glaring deficiency.

The MSU guards are their backbone, with solid guards all around but no players who have managed to be consistently dangerous on the offensive side. While Korie Lucious and Kalin Lucas are sure handed ballhandlers and passers, they need their teammates to be involved in order to free themselves up. Both are pass-first players. Guard Keith Appling is an athletic player who is still working his way into the collegiate game.

A lot of analysts say Draymond Green “doesn’t have a position”, which is usually just a kind way of saying he’s too small for his natural position. Draymond is a natural PF that has the skills to play SF effectively and even can move into the SG spot in a pinch. He has to focus on continuing to improve his small forward skill set in order to have a real shot at the NBA. Right handed. Athletic, moves well without the ball, good at setting screens and executing the pick and roll. Can rebound well and play multiple positions. Hard-nosed player. Not a slashing forward, works to get open looks or putbacks. Can hit a mid range jumper, and can shoot from outside, even while being defended. Has a high release which makes his shot tougher to block. Strong enough to play in the post at the college level but would be undersized at the pro level and would only be used in the post as a last option. Most natural position at the pro level would be a small forward who could play some time in the post, some time at shooting guard. Will have to work, but will get looks from NBA teams, may get a shot in the second round or summer league.

Sherman is quick in the post with one-on-one back to the basket moves and can get his shot off by getting around his man and to the rim. A finesse post player, still working to prove himself, but has a lot of room to grow. Valuable on the offensive end. Has several post moves to get his shot off over the defender or get around his defender, but a finesse finisher. Needs to get stronger, works hard on defense but sometimes can lose his man if he drifts too far out on the perimeter. Runs the floor well. Right handed. Good hands, adept at receiving the pass on the run, under the basket and while being defended. Gets his shot up quickly, decent free throw shooter. Needs a pull up jumper in his arsenal. Not really a shot blocking big or rebounder at this point.

A pure PG who has a pass-first mentality, but works to get open looks with or without the ball and can hit pull up jumpers. Not exceptionally fast, but fundamentally sound and poised while running the point. Might get some looks as an NBA second rounder or summer league player. Right handed, but can handle the ball ambidextrously. Can play the off guard, but undersized for the position and not a slashing scorer. When playing the 2G, can find gaps in the defense with his dribble for pull up jumpers.

Davidson vs UNCW: Battle of the bigs