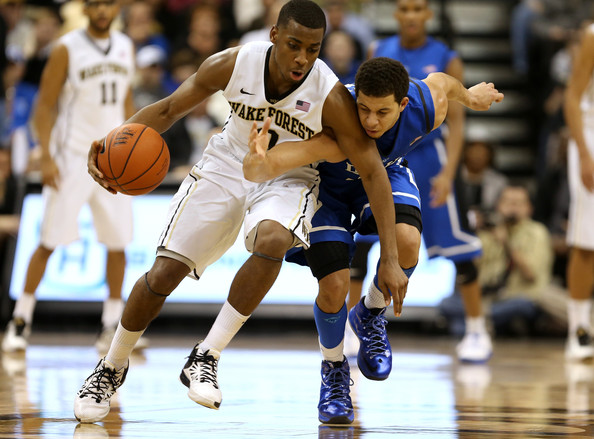 Strengths
Loved his aggressiveness on the defensive end. Hounded the ballhandler. Stays in front of ballhandler, good lateral quickness, stays down in his stance, and has quick hands. Did a good job of fighting around on-ball screens as well.

Showed good change of speed and the ability to create for others off the dribble. Had several nice flip passes in traffic to teammates in middle/post after breaking down initial defender. He has good size and strength for the PG position at 6’3” and has excellent upper body strength. Has an excellent pull-up jump shot- goes right at defender and is able to stop on a dime and pull-up under control, rise up, and shoot. Uses screens effectively and can create off the P/R. Does a nice job as a freshman of being a leader and general on the floor- uses hand signals and puts players in their spots. Poised and patient.

Weaknesses
Prefers to go to his right- needs to improve his left hand. At this point, while he is a solid ball handler, its not up to pro standards for a PG. He is a high dribble and he needs to get it tighter when attacking rim. Got several of his lay-up attempts blocked this game going up against the length of Florida State. Needed to use his body and go in stronger on these attempts instead of going in casually with the ball exposed and away from his body. Poor FT shooter, which is surprising- he is shooting 63% for the season from the line, wish you would want your PG to be in the 80’s if possible. Needs to develop a more consistent 3 point shot as well. Speed and first step quickness are a concern.

Took the wrong line at beginning of game defending a pin down screen- instead of going directly up in the middle of the floor in a straight line, he followed his man in a circular motion and got caught on the screen.

Terrific on-ball defender, but must work on being a better off-the-ball and help defender. Is in the right position most of the time, but instead of getting in front of the big man underneath, he stood beside them. Has tendency to turn head and body at times when defending off the ball as well. Most of these mistakes can be attributed to the fact that he is a freshman.

Overview
Played both guard positions this game, but mostly played the PG spot. Below average game for Codi tonight as he struggled to score or impact the box score in a big way in his 36 minutes of court time. Wake has not been good on the road this year and this game was no different. After beating the number 2 team in the nation on Saturday, they lost this game to an un-ranked and frankly not very good Florida State team. Codi has started every game this season, and is third on the team in scoring with 8.4 ppg, number 1 on the team in total assists with 68, compared to 49 turnovers. What was impressive tonight was the fact that he played such a long period of time with out turning the ball over 1 time.

Miller-McIntyre has potential and has and will continue to only get better as he gets older and more experienced playing at the college level. His intangibles he brings are impressive especially as a freshman, as he is poised, shows leadership abilities, and he is under control. He is a pure PG who knows the game, uses picks, changes speeds well, and has a good mid range pull-up. He should be a 4-year guy and will be a pro prospect by his senior year. Codi will be even more heavily counted next year as the teams leading scorer, senior guard, CJ Harris, will have graduated.