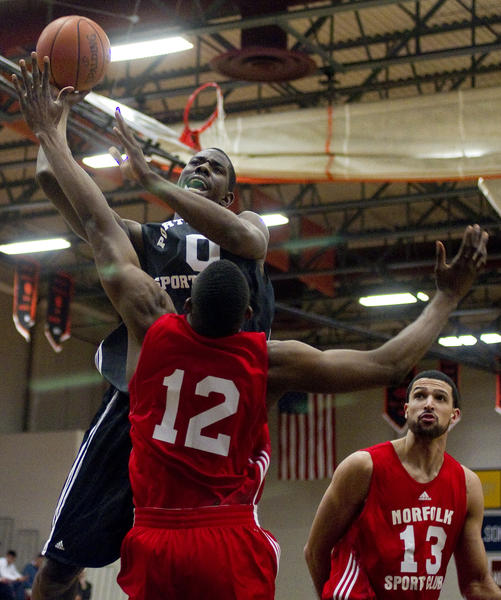 Looked comfortable and calm on the FT line-soft touch. Has the ability to step out and hit the 18’ midrange shot. Good size and good timing when blocking shots. Struggled this game early on but showed good footwork and post moves including a running hook and a good slide dribble, but struggled to score because of lack of quickness and athleticism-factors that will hurt his draft stock. Played better in the second half. Will be safe fire first round pick-a player of his size and skills will find a place to contribute.

Very good on ball defender. Does a good job of feeding the ball to the post. Lightning quick with and with out the ball. Keeps his dribble alive and uses picks-solid passer who always has his eyes up. TO prone. Showed the ability to get to the painted area where he can finish with a floater. Walker is an interesting case as far as his NBA stock goes. His PG skills are still a work in progress and not yet NBA-ready in my opinion. His size is an issue. He is a good 3 point shooter and very quick in the open court. He finished up a terrific 4-year career at Florida by being named to the SEC All-Conference team. I wouldn’t be surprised if a team took a chance on him late in the second round because of the value the NBA places on guards that can get to the rim. If he doesn’t get drafted, I see him as a good fit with a D-League team.

Division II player of the year. Pretty good lateral quickness and on ball defender. Contests shots. Communicates on the floor and is unselfish. Will be a solid overseas player, but does not have the physical tools or skills necessary to play the NBA level.

Very athletic-active on the offensive boards. Did a good job of contesting perimeter shots. Finishes with dunks-capable of finishing with contact. Very solid and strong upper body. Body and athleticism are NBA ready but he is still a bit raw offensively. Has a hitch in his shot where he hesitates on the way up but is surprisingly accurate at least from the FT line. May earn a few individual workouts with teams with a solid showing, but that is where his NBA timeline will most likely end.

Surprisingly the most impressive player on the floor early on. Great rebounder on both ends-secures board and chins it. Solid frame that is NBA ready. Good shot blocker both in the paint and on the perimeter. Impressive and underrated passer-hits cutters and throws good outlets to start the break. Uses strength to push players off black and keeps players from establishing deep position on him. Struggles to defend quicker players past 15’- does contests and block shots but stays too tall and doesn’t get low and move feet laterally. Showed the ability to put the ball on the floor for a couple of dribbles and kick to open man. Efficient around rim with either hand including a high hook shot that is very reliable- showed an array of post moves throughout games- always kept defenders guessing. Strong finisher-a big athlete who plays extremely hard and runs the floor. Plays hard in stretches but then because of lack of great conditioning will get beat down floor a couple of possessions in a row to rest- shouldn’t be a big deal at next level, as he will most likely come off bench to provide brief sparks. Has the ability to play the PF position at the next level. Showed the ability to reverse pivot and hit the 12’ jumper with a hand in face. Good FT shooter- soft hands- caught a rocket pass from Erving Walker on the break, gathered himself and finished with a 2 hand strong dunk. Playing with a lot of confidence in this game- he really impressed me in all facets this game. In my opinion, he is definitely worthy of a training camp invite and possibly a roster spot at the next level.

All over the floor today. Excellent shot blocker and rebounder. Has the ability to score in a variety of ways. Can finish above the rim with authority. Was the MAC Player of the Year this year after an impressive senior year.

Good Pick and Pop player- a 6’10” guy who can hit the 3 is attractive to NBA teams. Good rotation and arc on perimeter shot- can hit the 3 with consistency- quick release for big man. More of a perimeter guy then a banger inside- shied away from contact on both ends. Needs to do a better job securing rebounds- allowed guards to take ball away from him several times. Would like to see him be more of a rebounding threat and scorer inside. Good outside shooter- but settles for it instead of going inside- did not see any post moves from him today. Will like to see a more consistent game from start to finish next game.
Did a Sleeper Report on him earlier in the year when Yale played Wake Forest.

Out of control and loses balance easily. Showed the ability to split the defenders in P/R situations and get to rim and finish over defenders. Tough player. Needs to improve his shooting ability.

Poised. Plays the game under control. Struggled offensively early on to get it going. Zack Rosen from Penn did a terrific job defending him- Jordan struggled to get to the rim and when he did he had a hard time finishing. Lack of speed and size was evident- will limit his pro chances. Good footwork coming off screens for shots. Looked tired from ball pressure late in first half. Really forced some shots when he felt it was his time to shoot. Came out in the second half looking more comfortable offensively knocking down a pull up jumper and a floater in traffic. This up-tempo game does not suite him, as he likes a slow-down game- he looked tired and winded. Will gets some individual workouts, but he is most likely headed overseas to play. More of an undersized 2 then a playmaking PG. His inability to get to the paint and break man down off dribble will hurt his NBA chances.

Agile and fluid. His length really makes him a solid versatile defender. He collected several steals and was active throughout. A bit tentative offensively. Runs the floor- long stride. Needs to improve ball handling, especially his left hand. Needs to add about 15-20 lbs of muscle to bang with PF at the NBA level- has a frame that should allow this to happen. Can finish above the rim- highlight dunker. Low release but solid form on jump shot. Good body control in air. Disappears for stretches.
Did a Sleeper Report on him earlier in the year when UAB played Southern Miss.

Excellent on ball defender- quick hands and does a great job pressuring the ball from end line to end line. Had a couple of on-ball blocks as well- good considering size. In the opponents shirt defensively- best on ball defense seen today. Lefty who sees the floor and will hit the open guy. Floor general and vocal leader- was not afraid to tell teammates where to be- extension of coach on the floor- gathered guys together at FT line during dead ball situations. Didn’t look for own offense much- was mainly concerned with getting team in sets and starting the offense. Did show a nice head fake and ability to shoot over taller defenders. Accurate and reliable set shooter. Not as explosive going to his right- when he went right went back to his left for scoring move. Has a future as a coach after an overseas career. Reminds me a bit of Jaycee Carroll who played for Utah State and for the Boston Celtics Summer League team a couple of years ago.