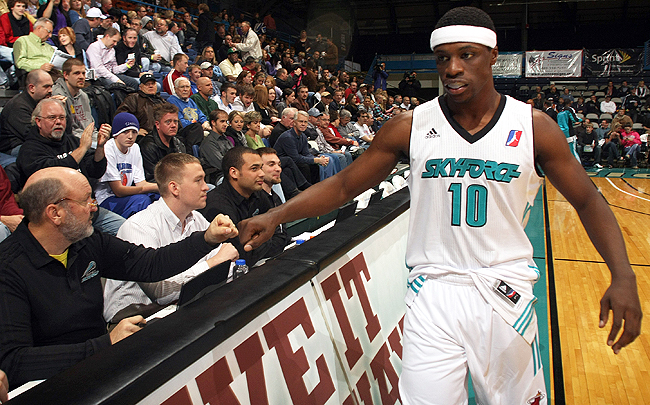 The Skyforce currently have an infusion of size in Dexter Pittman, the 6’11” rookie who is under contract with the Miami Heat and was assigned to Sioux Falls on November 26, 2010. Pittman has quickly become the leading scorer on the SkyForce, and becoming their top scoring option. Anthony Harris, a 6’2″ guard out of Miami is handling the starting point guard duties. When playing against opponents who have bigs that can shoot outside, coach Tony Fritz will go with a smaller lineup to try and keep up, as the SkyForce don’t have those kinds of bigs.

The issue for the SkyForce is that they don’t have consistent scoring and are not much of a threat from the outside. Only Anthony Harris and Keaton Grant are effective outside shooters, and Harris rarely looks for his shot from the perimeter. The entire offense of the SkyForce is predicated on their ability to slash into the teeth of the defense, but are not able to consistently rely on that strategy to score, and they rarely use the defensive collapsing to kick out to a perimeter shooter.

Pittman is currently assigned to Sioux Falls from the Miami Heat. A big post player with bulk, not quick but solid in the lane and strong. Needs to work on catching the ball in traffic and on the move. Right handed. Not a strong free throw shooter, only averaging just over 50% during his D-League stint. Not a high flyer, tries to get both feet in the paint to have the best chance for a power move to score. A bit flat-footed around the rim, but at 6-11 is still a lane clogger and can score. Has a right handed hook that works well over the shoulder, from about 10 feet away.

Note: Pittman was recalled to the Miami Heat on December 20, after these games were scouted.

Slashing small forward with a fluid finish. Quick with the ball and has a knack for getting around his defender, definitely has the speed and size to play the small forward spot even at the NBA level. Most of his offense comes from slashing moves to the hoop. Right handed. Plays the power forward spot when the SkyForce go with a smaller lineup. Looks to score. Right now, Mason is a player who looks like he should be on an NBA roster, but he’s still working on putting it all together; he gets a step on his man, but needlessly hooks him on the way to the basket; needs to show a little more range as well. Definitely a player that other pro teams should be interested in, especially if he can continue to show improvement.

Mason did have some involvement with the Heat this season, but I could not find a record of him being assigned to Sioux Falls. He originally was reported to be closing a deal with the Heat in September.

Sure handed pure point guard with good quickness and can shoot from outside, but a pass-first player. Faster than his teammates, he has a tendency to deliver the ball to them too close to the basket which puts the big men in trouble. Can slash into the defense to cause issues, but does not look for a mid range jumper. Effective on the break, can change speed on the move to put the defense out of position.

Sykes is a high-energy, highly active player in the paint who isn’t overly strong but works hard to get loose balls and putbacks. Moves well without the ball, does not have the size and bulk to defend big centers but is quick for the PF spot. Sykes is having to play a lot of the center position for the SkyForce due to a lack of size and has started multiple times this season.