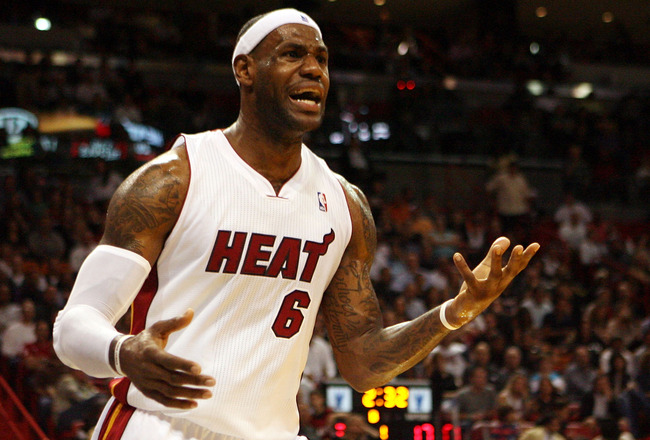 At some point between the Nike ‘Witness’ marketing campaign and ‘The Decision’, there was a growing backlash against Lebron that culminated during his exit from Cleveland and became full-fledged Hatred for All Things Lebron and, by association, the Miami Heat.

Recently, Shaquille O’Neal wondered why Lebron has so few endorsements when compared with other players, even in other sports. The answer should be obvious; too many people dislike him.

But upon closer inspection, it’s not obvious why so many people root against Lebron (Cleveland fans notwithstanding). He’s a bit arrogant, but so are a lot of really good players. He is a very good player, almost certainly a Hall of Famer barring anything derailing his career. When he left Cleveland, he was perfectly within his rights to do so, even if announcing it on a hour-long special wasn’t the best choice.

All Lebron has ever really done was be drafted #1 out of high school and become one of the best players in the league, garnering multiple MVP awards and winning a title. So why all of the hate?

See, when Lebron was in high school, the media fell in love with the “idea” of Lebron. Sports analysts have been telling fans that Lebron is the greatest player of all time before he even graduated high school.

There’s a funny thing about predictions, and I know this all too well as a scout. Once you make a prediction, it’s important to be right in order to be considered credible. No one is right all of the time, but listening to some scouts, talk show hosts and analysts you’d never know it. Once you stick your neck out with a prediction, you are vested in it being correct. It’s hard to be truly objective. Imagine the pressure of saying that a player who is still in high school will be better than MJ, Wilt or any other player who ever stepped on a basketball court.

The media bought into the idea of Lebron heavily and it oozed out of every comment, every play he made. They needed to be right about him, and they tried to convince us even before he’d made a single basket.

He’s always been an exceptional passing forward, but even on routine plays the analysts would gush. In James’ first season with the Cavs, during a national television broadcast, he tossed a three-foot pass to a cutting Carlos Boozer, who sliced through the lane and dunked over an opponent, but the color commentary was on Lebron’s ‘passing vision’, not Boozer’s movement without the ball or thunderous dunk. Not content to wait until Lebron proved himself, the media developed a habit of praising even the mundane aspects of his game. They were vested. They needed to be right about him.

And that has become the issue. When Michael Jordan dazzled the sports world with his play, no one needed to be told how amazing he was. We all saw. When Tiger Woods was destroying the PGA, everyone knew it without being reminded. No one ever doubted that Serena and Venus Williams were incredibly good. No one questioned if Wayne Gretzky was amazing. But even today, the media still constantly tells us how good Lebron is, as if we are all missing it. As if we, the great unwashed fans, have no idea what we are seeing. During game four against the Pacers, Lebron had a nice block on Paul George, who was falling to the floor while attempting to get a shot up, and color analyst Reggie Miller talked up Lebron’s block for a full five minutes, accompanied by replays of every possible angle. A few minutes later when George scored over Lebron and drew a foul, Miller uttered not a peep about his excellent play. Both were good plays. Neither deserved gushing commentary. Fans are well aware of what they are watching.

The reason people root against Lebron has very little to do with Lebron and a whole lot to do with overexposure, much in the same way that some entertainment stars become huge, seemingly appearing in 10 movies at once, then suddenly the public can’t take them anymore. Lebron hasn’t really done much to warrant the hatred; he doesn’t give bombastic interviews or change his name to Metta World Lebron. He plays hard. He passes well. He can play multiple positions. He’s legitimately won MVP several times. He won a title.

The media could help Lebron’s image a lot, not by talking about him more, not by praising him more, but by talking about him less. Let people just watch, and stop telling them how every play he makes is so astounding. Stop ignoring his mistakes (such as the fact that he travels with the ball – a lot) and when other players have a dominant performance (like Roy Hibbert), let’s heap praise on them as well, shall we? It’s not that Lebron isn’t great. It’s that the media wants to praise him for everything, not just the plays that deserve it.

There is plenty of Lebron’s game to praise – and a lot to like about him as a player – if the media would just pipe down and let it happen on its own.

Hey…didn’t the Heat used to have Wade and Bosh?

There Are No Do-Overs